Be Inspired by 13 Serious Games Transforming Lives in 2022 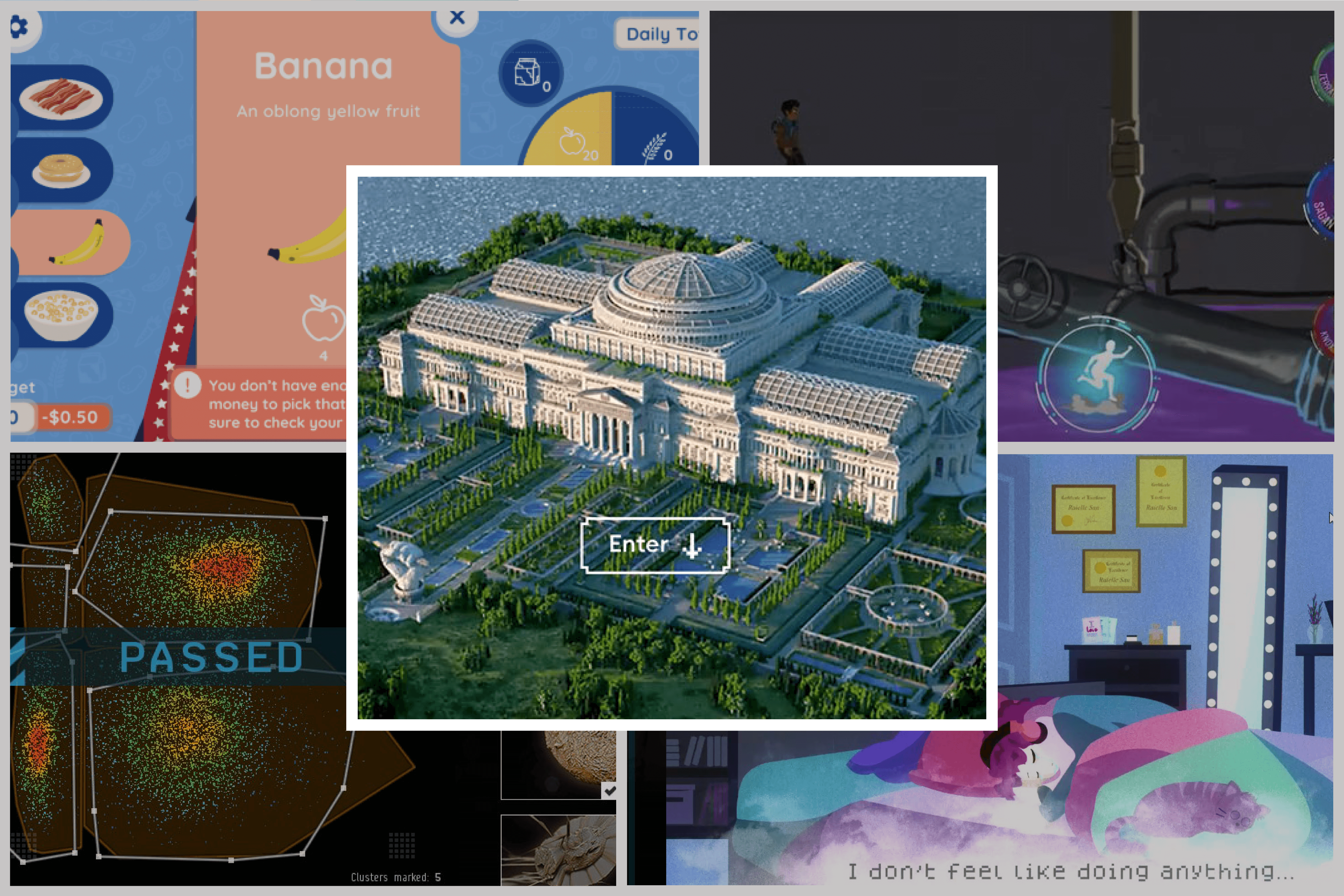 The challenge of designing a game with the intention to transform a player's beliefs or thought process beyond the game itself is known as a “real-world transfer”. Players would ideally pick up a skill or behavioural change. The goal would be to create a change within the player that continues even if the player stops participating or interacting with the game. That is the main purpose of a serious game, or what we’d like to call them -  transformational games.

You can read all about what makes a serious game on my previous blog What are Serious games? The Ultimate Guide for 2021.

Inspiration and creative reference can greatly change the outcome of your next potential project and I've compiled the definitive list to help you. So, who’s been making waves with serious games?

Elude was developed to raise awareness and information surrounding depression, in a clinical context. The game was included as part of a psycho-education package to help friends and families of people suffering from depression understand what they were going through.

In the game, depression is portrayed metaphorically through the landscapes of a dense forest. The core gameplay involves looking for “passion” power-ups and objects in order to overcome obstacles and eventually the forest itself.

Kangazoo is a mobile simulation that promotes the conservation of indigenous flora and fauna. Players seek to rescue, rehabilitate and release animals in order to further their progress in the game. The game was developed to match the Department of Foreign Affairs and Trades (DFAT) goals to showcase the wonders of Australian native wildlife. It highlights real environmental and zoological research from Australian universities.

Kangazoo teaches players how to initiate real action through environmental and social change. It also has a diverse range of characters to represent the traditional owners of the land. The game is available internationally in hopes to attract zoology and biology students from around the world who will help build Australia's future.

Amour de Soi was created by young participants during MENTAL Jam, which was part of a research project conducted by RMIT University. The development created a knowledge transition between lived experiences of depression and anxiety, with the processes and teamwork of creating a game. The finished game was presented at the Games for Change Asia-Pacific 2021.

The game follows Raielle San and the manifestation of her self-conscious “Pixie”, and their journey to help Raielle find self-love after the ending of a toxic relationship. The gameplay style involves clickable elements around her room to help the player learn her story and read positive affirmations from Pixie.

Survive the Century offers a unique platform, choice-based game that tackles the topics of climate change and social change. It puts forth the ideas and actions that the player can take to actually make an impact.

The game takes place from the year 2021 to the year 2100, in the form of news headlines and descriptions. The player is then given options on how to proceed, what decisions they may have to make in order to help or hinder the global situation. While the game is still a work of fiction, it is based and informed heavily by real science and research. Just as a serious game should be, it fosters the ideals of human flourishing rather than temporary pleasure or addictions.

Dr. Sarah Murthi of the Maryland Shock Trauma Centre, as well as the Maryland Blended Reality Centre reached out with an idea that would potentially change the way paraplegics and shock trauma patients recover and go through physical therapy. Dr. Murthu approached MICA GameLab’s director Jason Corace and along with some medical research funding released Quadcade.

Quadcade takes players through basic physical activities such as farming, running or archery, and it's all controlled through an orally-activated joystick “Quadstick”. This is due to the nature of paraplegia of the recovering patients and the reintroduction of basic breathing exercises. Its main purpose aside from adding a bit of fun to recovery, is to test and monitor the patient's ability to breathe off their ventilators.

Reset Earth was created to sensitise the current generation on the consequences of the depletion of the ozone layer and the effects of greenhouse gases. The thought process behind the game hoped that the adolescents playing will invest into the game in a way that will implore them to keep the fantasy-fiction within the game, and not let it leak into real-life.

The game, set in a post-apocalyptic 2084, combines retro graphics and hand-drawn styles where players switch between characters that walk through four levels of the game. Levels are cleared by unlocking puzzles based in environmental history and the sciences that could protect the planet.

“Mass Mutations” is one of the keystone games in the e-learning app “STEM Explorer”. The app is primarily used for education, where students have fun learning over holiday seasons. The gameplay essentially involves players answering STEM related questions to power up a tesla array and defeat mutant plants.

The curriculum built into the game focuses on Australian education standards. It's showcased in an innovative risk/reward system that guarantees a good balance between fun and learning. This was to ensure that kids were coming back to the app to learn, and not to advance their points.

Minecraft, in collaboration with Reporters without Borders (RSF), wanted to create a virtual space where young people could access journalistic content that was otherwise censored in their countries. The digital library could be accessed by anyone with a Minecraft account as the game’s servers were not restricted to play. The game has over 20 million players in 165 different countries and is even being used in schools and universities as a knowledge tool.

Project Discovery is a new adventure that players on the EVE Online sandbox MMO can embark in. Players analyse clusters of cells and directly contribute to research by real-world scientists to help fight the present novel coronavirus. Through the series of simulations present in the game, players can unlock how the virus affects our immune system.

Players engaging in the research stand a chance to rank higher in the game, as well as earn unique in-game awards. But the most important part of participation is the rewards of donating to real science!

This casual puzzle game is meant to make safe sex and its intricacies less heteronormative, specifically to be used in the school educaitonal system. The game includes a multitude of body parts and sexual practices that build a more complete view of sex education and awareness.

The tiles consist of body part tiles and barrier tiles, the player must connect the right body tiles with the right barriers in order to clear them. If an incorrect group is selected the tiles will lock and make the game harder to finish. On completion of levels, if incorrect barriers are used, the game links back to documentation on correct and safe uses.

That’s Sus! is a game meant to help players understand and react to situations that potentially could show problematic behaviour. Players enter a common room on the website, either by invite code or randomized picking, and are presented with different scenarios. Players then react to the scenarios using stickers and later judge other players' responses. The game is completely confidential and players (unless friends already) are unaware of who’s reacted to who’s answers.

Pick Your Plate! by the Smithsonian Institution (2019)

“Pick Your Plate” was created in alignment with the UN Sustainable Development Goals to be used in classroom settings. The game aims to teach children how to build healthy meals with the various nutritional guidelines around the world. It also promotes budgeting and its relation to access to healthy meals, as well as portion control.

Players can plan their morning, midday and evening meals in the style of the country they choose between Argentina, Australia, Benin, Cambodia, Finland, Lebanon, Mexico, and the United States of America.

Zombies, Run! Puts players in an immersive narrative where they play as “Runner 5” to complete challenges and missions to uncover story pieces and collect in-game rewards. The game's GPS and fitness systems track distance, pace, heart rate and calorie burns in a convenient hands-free environment. Users can also opt to participate in “zombie runs” that promote interval sprints to boost both gameplay and fitness goals.

The game was developed in collaboration with Kickstarter and rose to be #1 in the Apple App Store within a week of its release. Players have access to over 200 missions and a synced online system if they switch devices.

How can you connect to your community through games?

There are around 17 million Australians that play video games at an average of 83 minutes per day. That's 83 minutes of potentially reaching out and transforming a player's thought process through play.

Games have the potential to reach across genders, demographics and borders to unite people towards a common goal - positive change. This is mostly because of the ability games possess to boost engagement through immersive storylines.

Games can be accessed through a variety of different platforms and can be applied to a multitude of industries. Serious games have also been employed in schools, as you may have seen in some of the examples, as a method for skill development and prolonged retention.

The bottom line is, serious games provide a safe and fun learning environment. The 13 examples I’ve given are just a start for the wide world of serious games that exist and are being developed daily. And now, you too can be a part of this global movement!

Chaos Theory has a passion for creating serious games that create lasting positive impact. With over 7 years of experience in the field, we are here to answer your questions. Book a chat with me to find out more on serious games, or your next potential serious games project!

No items found.
SEE ALL POSTS